How to Change Relationship Status on Facebook:- That’s what you wanna know? You’re at the right place, because that’s what you’d have a clear idea about by the end of this piece.

The memory of the scene from “The Social Network” where Mark Zuckerburg overhears a conversation between two of his friends, “is she single”, asks a guy. And then the reply comes “How would I know? Does she wear a sign indicating her relationship status” from the second friend.

And that’s how the idea of “Relationship status’s on Facebook” came into being. Mark wanted to let people put up signs of their relationship status’s. If nothing else, it’s just a complete expression of yourself, something Facebook always believed in.

So if you’ve ever remotely wondered how to change your relationship status on facebook, then this piece is for you.

Facebook has this awesome feature to let the world know what’s your current status of relationship. It let’s you put up almost all the possible relationship status’s:-

So see? There’s almost no kind of relationship that you’re into, but can’t list on Facebook. (Unless ofocurse you’re in some kind of weird relationship with yourselves.)

I mean what’s the point? In putting up a sign for the rest of the world to know if you’ve got a better half or not, right? Matter of fact, it is important, and that’s the reason before explaining to you how do you change your relationship status on facebook, let me answer this.

Okay so by now you know that it’s possible to change relationship statuses on Facebook, right? So here’s how to change them:-

Go to your Profile by clicking on your Name on the Homescreen.

Then you should see a “Family and relationships” option on the sidebar. Do click on it. 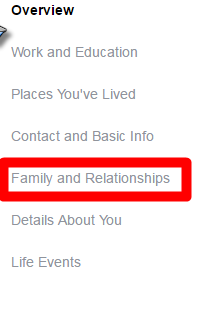 A slider-popup would come up with all the available relationship statuses possible! Just select the one you want to set, and click save. 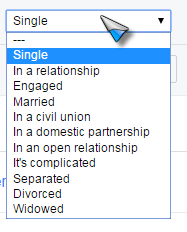 So yeah that was the answer to your question on how do you change your relationship status on facebook. But hey, maybe you don’t want to announce your status to the world, right?

In case you’re more of a private person and want to hide your relationship status from Facebook, here’s how to do it. Now I totally understand that not everyone wants everyone else to know what they’re going through in life, right?

A relationship status is something extremely private, so no doubt or surprise if you want to hide it. So let me explain to you how to do it.

(I’m not listing the steps again because it’s already listed in the above section, no use repeating the same thing again and again, right?)

So once you’re on that page, click on the small “lock” icon next to your relationship status.

This will bring it in the “edit” mode, so again click on the Lock icon. 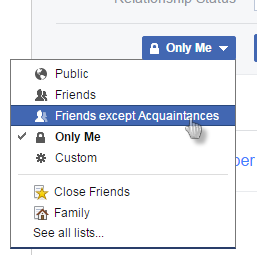 If you still got some questions or doubts left, do make use of the comment box! That’s what I’m here for.