How to Type Spanish Letters And Accents 2023?

There is no doubt about the fact that Spanish is one of the most popular languages in the world. It is the fourth most commonly spoken language in the world.

With Spanish lessons booming all over the country, people have been keen on knowing various shortcuts and How to Type Spanish Letters and Accents in various Microsoft functions.

So let’s discuss in detail about How to Type Spanish Letters And Accents into your files:

In case you frequently need to type Spanish letters and need instant access to Spanish letters, the best and the simplest way is to insert Spanish Keyboard.

Take a look at how to do the same:

And you are done! This is by far the most convenient and preferred method used to insert any foreign language symbols. In case your frequency of using the Spanish language is more, go for this method.

Putting Accents on Letters in PowerPoint via Symbols

Let’s say you want to deliver a presentation to the Spanish audience or for whatever reason need to prepare a Presentation in the Spanish language; it can be done easily with Microsoft PowerPoint. There are a lot of keyboard shortcuts available to insert Spanish letters.

However, these shortcuts are confusing and often result in mistakes. Another easier variant that exists is inbuilt symbols. Microsoft PowerPoint comes with its own inventory of symbols.

Take a look at How Do I Put Accents on Letters in PowerPoint: 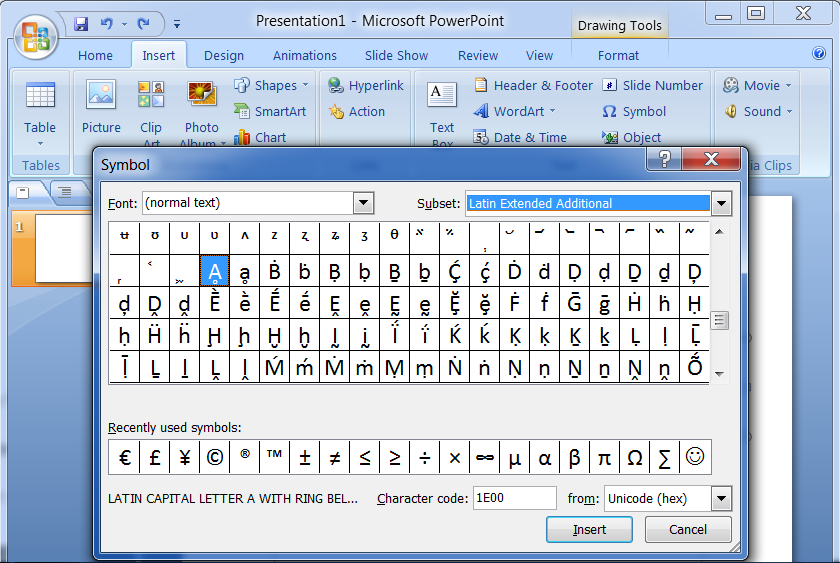 You can always change the font to the one you prefer by clicking the “font” option.

And that’s it! The particular symbol will be inserted.

How to Type Spanish Letters And Accents via Character Map

As far as symbols are concerned, there is no match to Character Map.

It contains almost all literary characters or symbols and various foreign language characters. It is available on all Window machines for free.

Character Map can be used to insert symbols in any Microsoft Files be it PowerPoint, Word, Office, etc.

Take a look at how to make use of it:

As far as Microsoft Word is concerned, one way to insert Spanish accents is via Character Map that we have discussed above. There is one more way, and it is by Symbol box that is inbuilt in MS-Word.

You can choose any one method as per your preference.

So, for all those who have been asking about How do I get letters with accent marks in Microsoft Word, take a note of the steps:

In case you don’t want to insert a new language keyboard, there are various key combinations you can use to insert single characters into your text. They may seem confusing initially, but once you practice them, inserting such symbols becomes a cakewalk.

The Spanish keyboard and the English keyboard doesn’t have many differences except with a few additional shortcuts: Take a look at How to Put an Accent on a Letter of a Word Using Your Keyboard:

Now, there is one more way to do this, and that is via using the character or numerical codes.  Make sure that while inserting them you use the keypad on the right of your keyboard and not the row of numbers at the top.

Using character codes is simpler as compared to the first method. Just press the Alt key and the specified three-digit number for inserting a particular Spanish accent.

Conclusion | How to Type Spanish Letters And Accents 2023?

With all the hacks stated above on How to Type Spanish Letters and Accents, you can add Spanish keyboard settings to your Windows and simplify your task of inserting Spanish letters into your PowerPoint presentations or those Word files or Office documents.